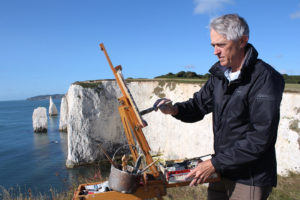 Old Harry lies at the end of a chalk headland that sticks out to sea and is part of the Purbeck Monocline that gives rise to the prominent ridge of steeply dipping Cretaceous chalk which now forms the Purbeck Hills. This chalk band runs from Swyre Head via Flower’s Barrow to Old Harry Rocks. From here the fold continues under the sea to The Needles and forms the central spine of the Isle of Wight.

Since the last ice age, about 20,000 years, the soft clays that lie on either side of the chalk ridge have been eroded by the sea; waves attack weak joints in the chalk to form arches and caves which eventually collapse leaving isolated stacks. Old Harry’s original wife fell into the sea in 1896, but new ones are being formed all the time as the sea’s destructive progress continues.