Topographically, Ballard Point is a long headland in the Isle of Purbeck in Dorset, which forms the northern edge of Swanage Bay. In Jeremy Gardiner’s paintings, its ‘noble contour’, as the painter Paul Nash described it, becomes a dramatic metaphor for the whole Purbeck area. During the two years that Nash spent in Swanage in the mid 1930s, he came to feel that the town ‘was definitely… surrealist. He meant by this a condition in which things exist – or are imagined to exist – outside their usual contexts; he may have been encouraged by the fact that a number of the lamp-posts in Swanage are marked ‘St Martin’s in the Fields’. Swanage is, then, a place where the unexpected is normal; where vision may be transformed. Emphasising the singularity of its seaside culture, Nash wrote of the town’s combination of ‘beauty, ugliness and the power to disquiet’.

Gardiner has known Swanage since childhood, when he made frequent visits to his grandmother during which he became familiar with the entire area. During the 1990s, while he was living in the United States, he made many subsequent visits. He has now returned to this country and with this exhibition reasserts his attachment to the Purbeck area. The Ballard Point series, on which he has been working since 1998, which consists so far of sixteen relief paintings on panel, with many closely related drawings, originated in the same Victorian terrace that Nash lived in over sixty years ago.

Gardiner works indoors, looking from relative darkness at the brilliant light on Swanage Bay, from an enclosed place to a vast expanse of sea and sky. His paintings suggest that scrutinised from his domestic shelter, Ballard Point becomes disquieting; it takes on a presence and personality that set it apart from the rest of the coastline. The huge sky and the continuous, undifferentiated expanse that surrounds the headland (particularly nos. 3 and 6) evoke the intensity of American landscape rather than an English scale. Similarly Gardiner’s colour, especially his subtleties of blues and sandy yellow, often recalls the paintings of the Californian artist, Richard Diebenkorn.

The Ballard Point series is experiential, not literally representational; Gardiner has sought to convey his long and varied experience of the Isle of Purbeck in a synthesis of vision and memory. In this respect he works like many English landscape painters after the Second World War who often adapted the imagery of late Cubism to blur the boundaries between abstraction and representation. Thus, while the silhouette of Ballard Point is always identifiable, the freedom with which Gardiner uses colour makes us acutely aware of the changes brought about by season, time and weather, that affect its appearance and the surrounding atmosphere. Nos. 8 and 3, for instance, vividly evoke the difference between summer and winter. In no. 8 we see an abrupt change of weather – and, perhaps of time – as the calm, wintry sky on the left of the panel waits to be engulfed by the drama of a dark storm in the centre. In no.15, the shifting colours of the sea, from yellow to blue and greyish-white, suggest alterations in temperature that may almost be felt on the skin.

It is evident that while sight plays the major role in Gardiner’s paintings, smell, sound and physical sensation also contribute to them substantially. If yellows convey the warmth of summer and hard-edged grey and white the chill of late autumn, that same warmth also recalls the plethora of smells that make up a seaside summer – ripe vegetation, ozone, sun-tan oil – and conversely, the anaesthetic effect of winter chill. Such vivid evocations of physicality imply the presence of the artist in every image.

Moreover, this same presence determines the way that we see Ballard Point. Does this mean that the series of paintings is a fiction? Certainly Gardiner dramatises Ballard Point. Set against colours that range from rich red or brown to vivid orange or a thin, hazy blue, it plays a different role in each of his panels. To understand the mixture of fiction and reality that constitutes the series, we need to look more closely at the way in which the paintings are made.

Gardiner starts not with drawings but with a prepared wooden panel on which the entire development of the image takes place. Each one is a relief constructed of enigmatic wooden objects and larger, flat pieces of wood. While Ballard Point is instantly recognisable in the upper part of each panel, about half way down is a densely worked and less easily deciphered still life. These are set within the wooden relief so that we see them as though through a window. Gardiner first constructs this notional window. Then he attaches the small wooden objects and finally he applies many layers of paint which he then scrapes down and overpaints so that the intermingled strata echo the multiplicity of memories that inform the work.

Much of the painting is done away from Swanage; it is thus largely a process of making memory visible. Yet memory is imprecise; it embellishes and creates fiction. We may compare the complex physical construction of Gardiner’s panels with the way his accretions of memory have helped to construct the mental image of the place that he portrays. The wooden objects that he attaches to the surfaces of the panels are not randomly assembled; instead he selects them all at boat-yards, choosing them for their shape, colour and, above all, surface properties. They are old discarded things and the off-cuts of repairs that embody their own, now irretrievable history. Gardiner’s drawings – which represent an alternative practice to painting rather than a subsidiary medium – also refer to ships in a very specific way. He often excises part of the surface and fills it with plaster, just as he makes ‘windows’ in the panels. The surface of the drawing then takes on some of the properties of the hulls of ships which, when they are repaired, vary abruptly between glossy smoothness and weathered roughness.

Gardiner’s paintings reveal both the permanence of a place and the contradictory ways in which different people will experience it. One person may see the Point as a place for a picnic, another as a hazard to shipping; diverse professional interests may identify it as good farm land or a prime site for holiday housing; a child’s perception of its size will differ from an adult’s; blistering sunshine or a howling gale will produce different but definitive sensations that may be attached to it for a life-time. Gardiner understands that all these reactions are fictions that embody truths; rather than seeking an essential Ballard Point he celebrates its multiple fictions, with their changing truths.

However, his panels also contain intimations of another kind of place, represented by the still lifes. Ben Nicholson, whose impact on his own work Gardiner readily acknowledges, is one of a number of artists who have painted still lifes as metaphoric self-portraits. Those that Nicholson painted in combination with landscapes may be understood as metonymic representations of his studio. Just as Nicholson repeatedly depicted a familiar range of jars and mugs set on tables and windowsills, Gardiner paints a comparable group of domestic vessels including a colander, bottles and a decanter, which he keeps in his studio. We might then, see the still lifes in the relief paintings as reminders of the room in which he works on the Ballard Point series and of his own presence within it. However, in the drawings they seem to function differently. Here they are dominant and the presence of the headland is correspondingly diminished. The complexity of the drawings, in which the objects are embedded in a mass of curves, is in acute contrast to the scale and bold shapes of the panels. Gardiner’s drawings speak eloquently both of the pleasures of familiar objects and of the way in which they, like places, may constantly be seen afresh and reinterpreted.

The Ballard Point series fits readily into the modernising tradition of English landscape painting established by such artists as Nash, Nicholson, Graham Sutherland, Peter Lanyon and Terry Frost. Like many of his predecessors Gardiner seeks out new places and visual experiences while retaining a particular fondness for a specific area. His exhibition is then, both a homecoming and a departure; a terminus and the beginning of a new set of paintings about landscape. 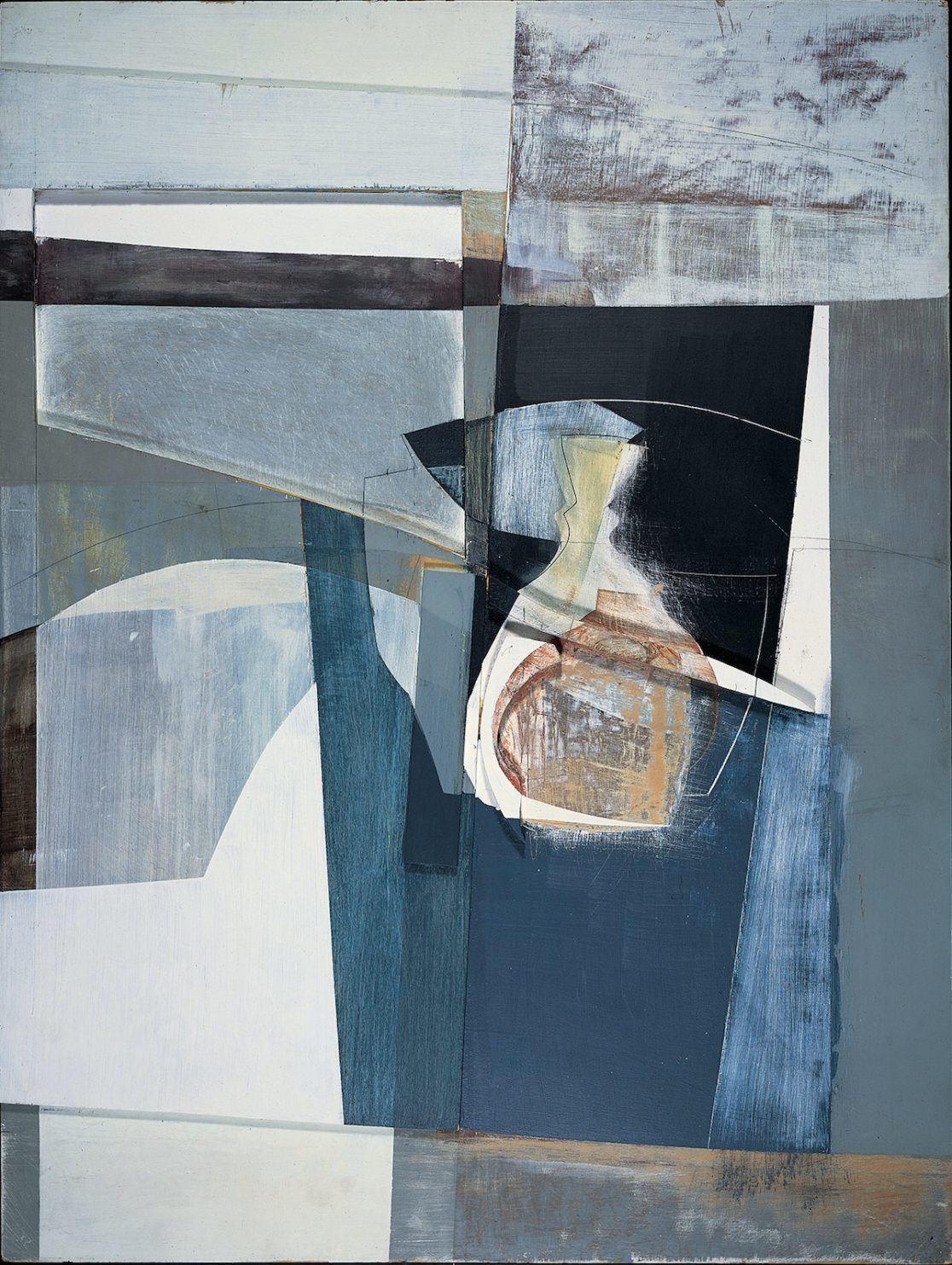 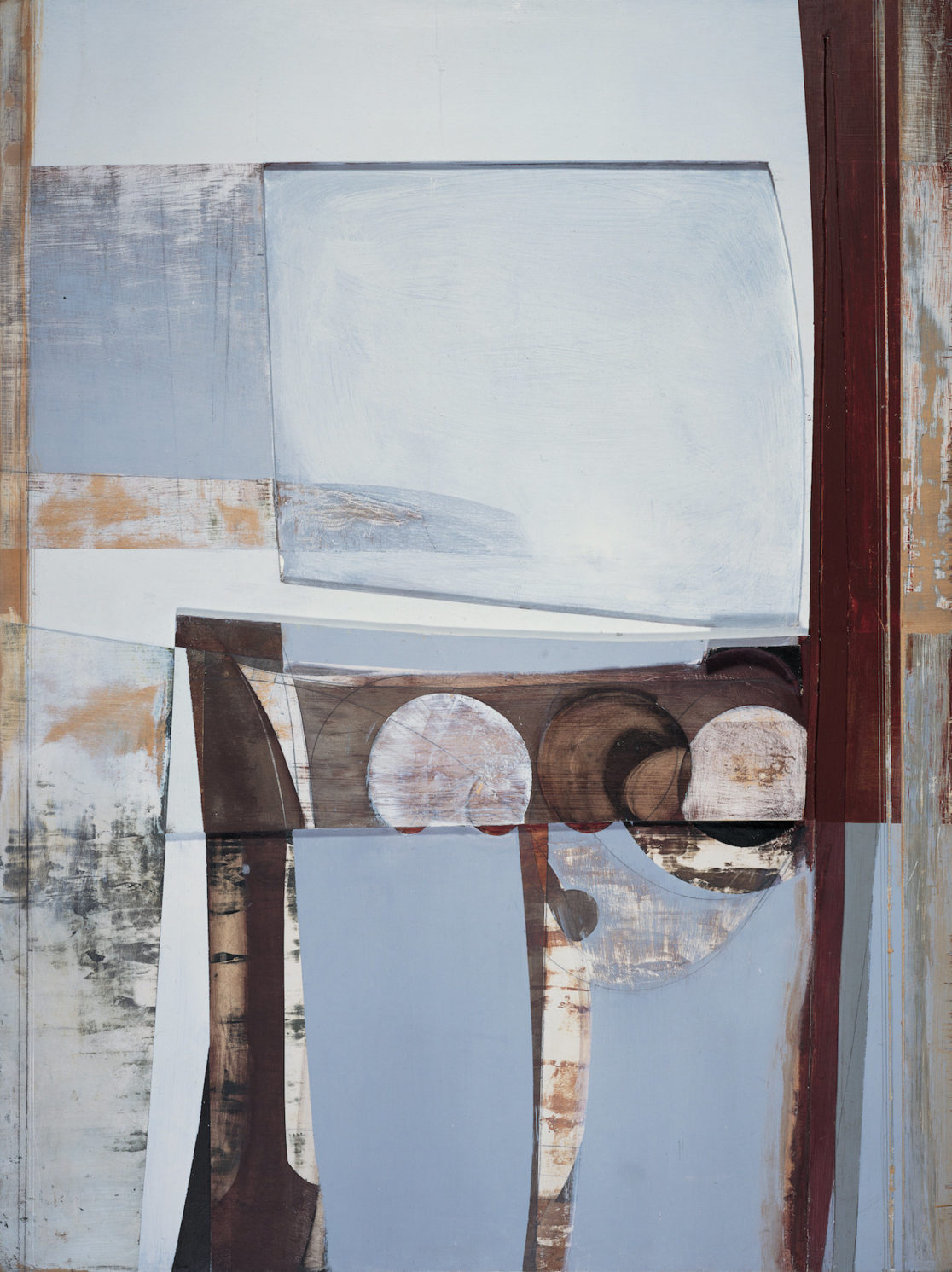 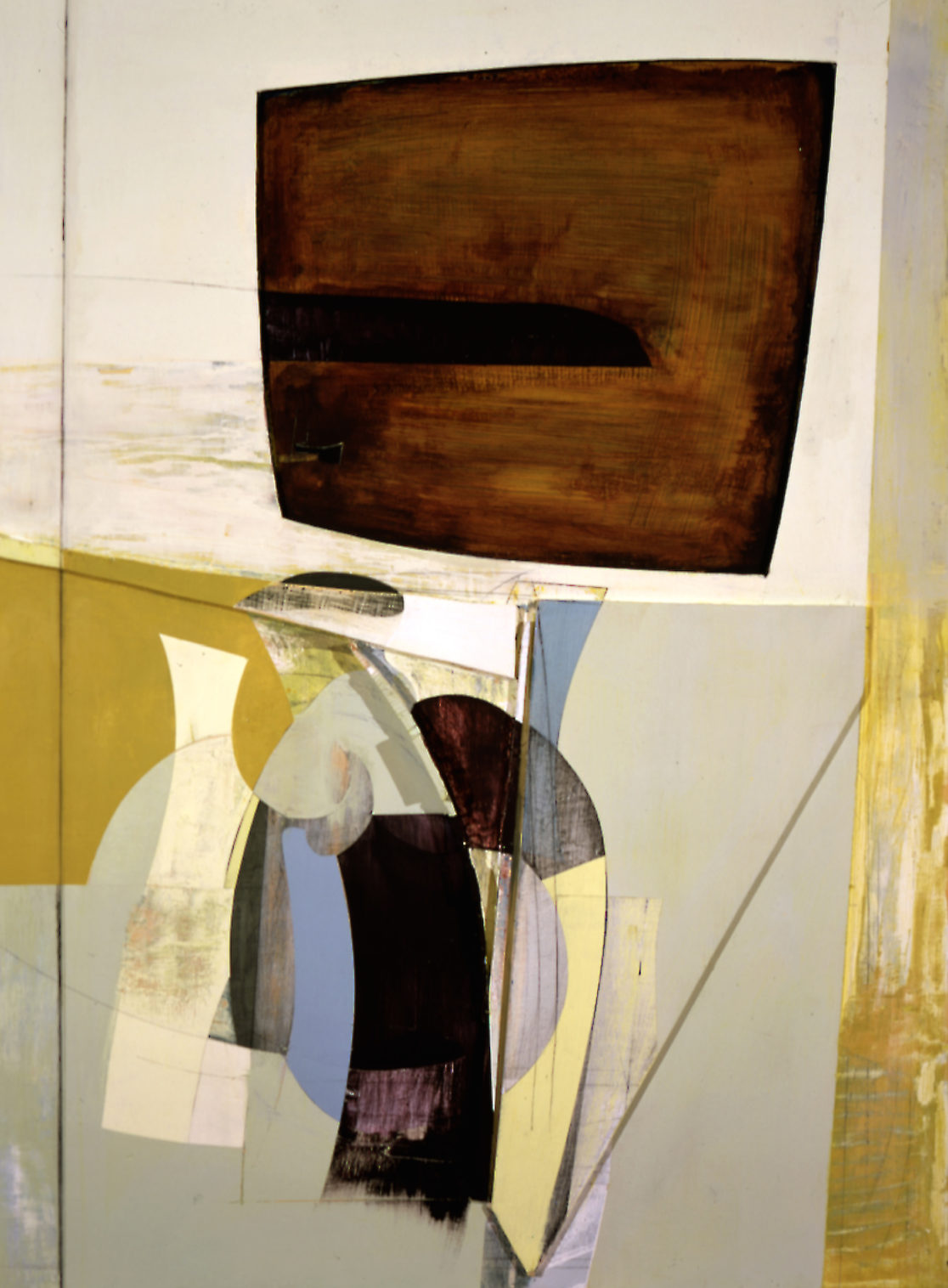 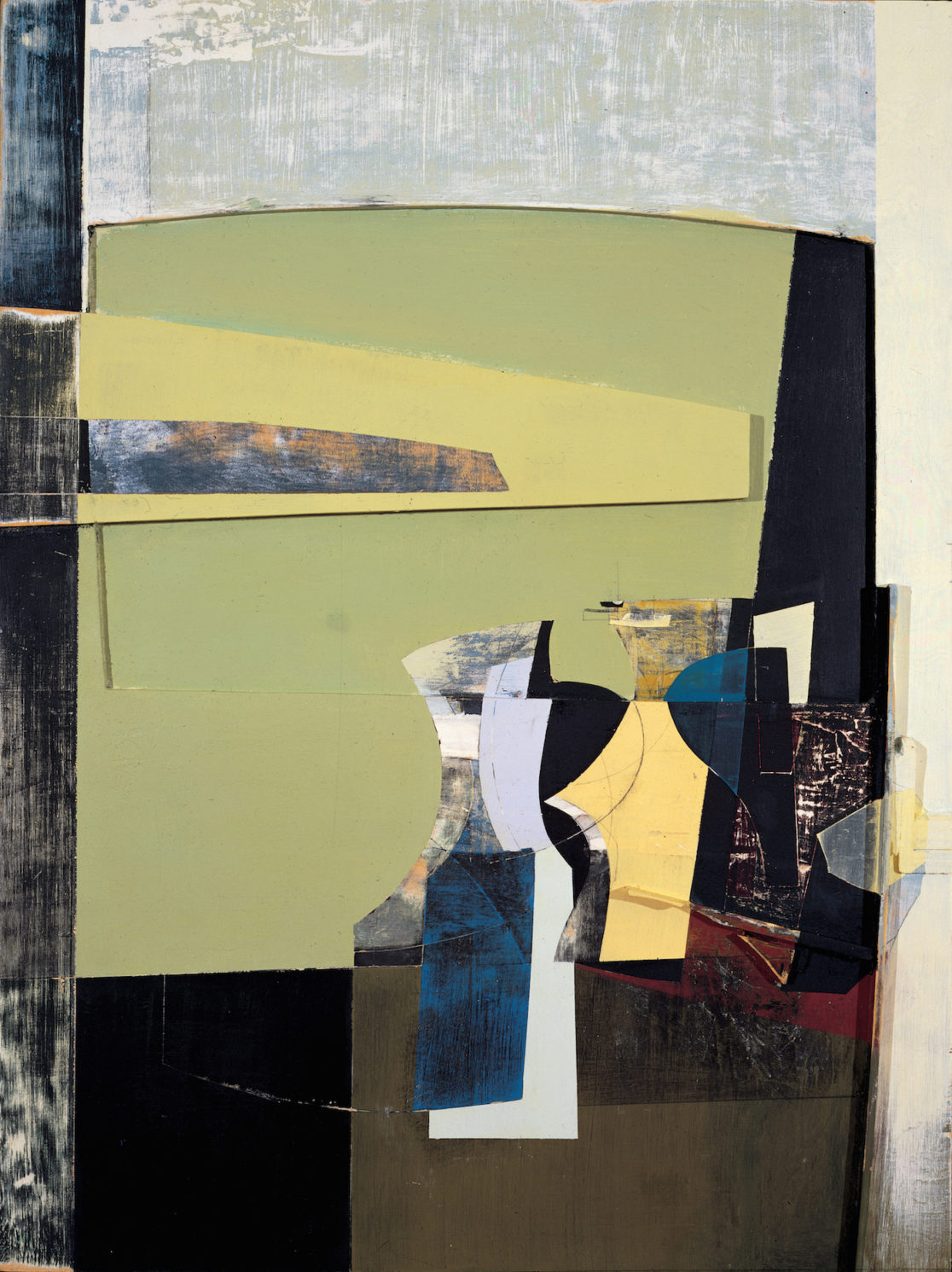 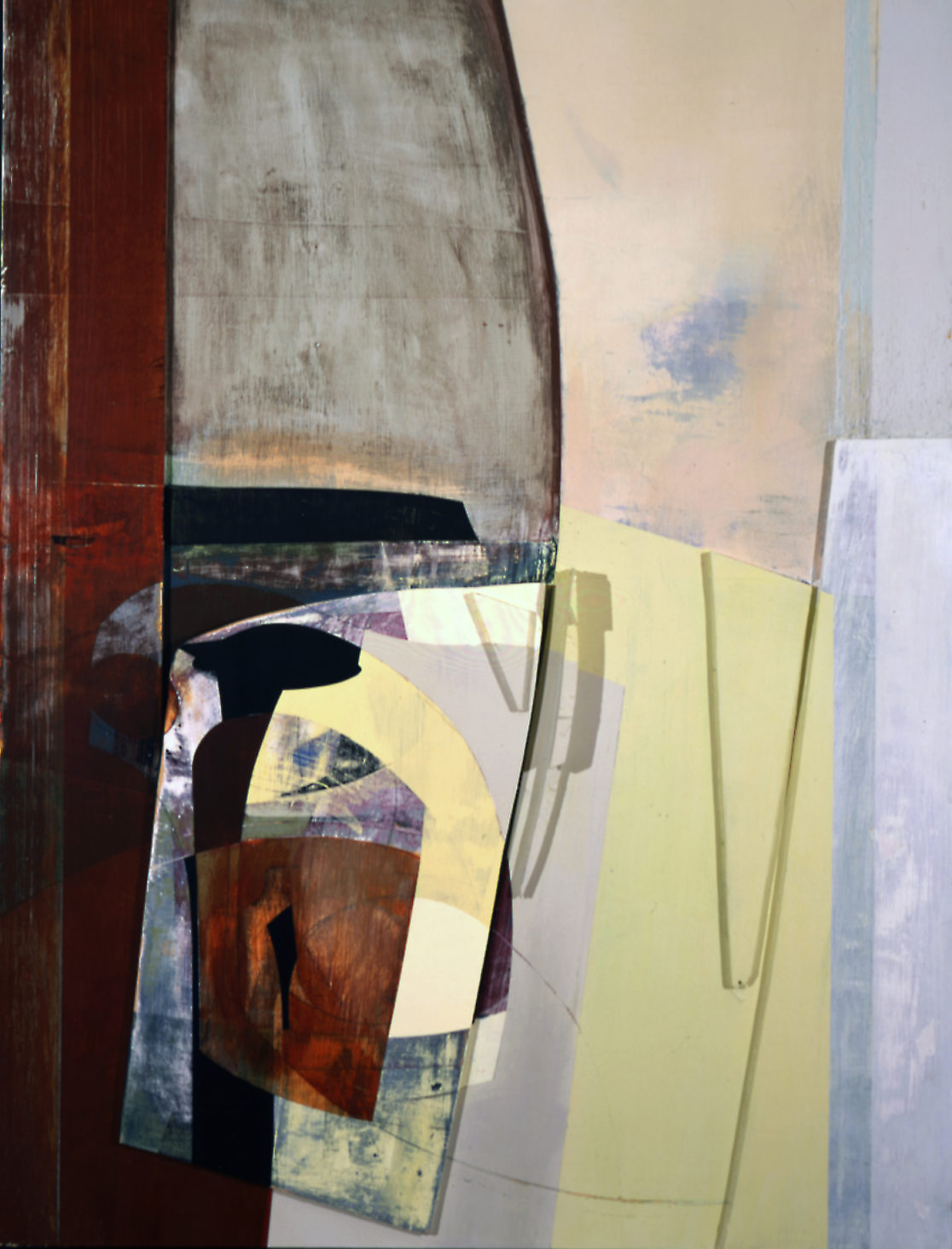 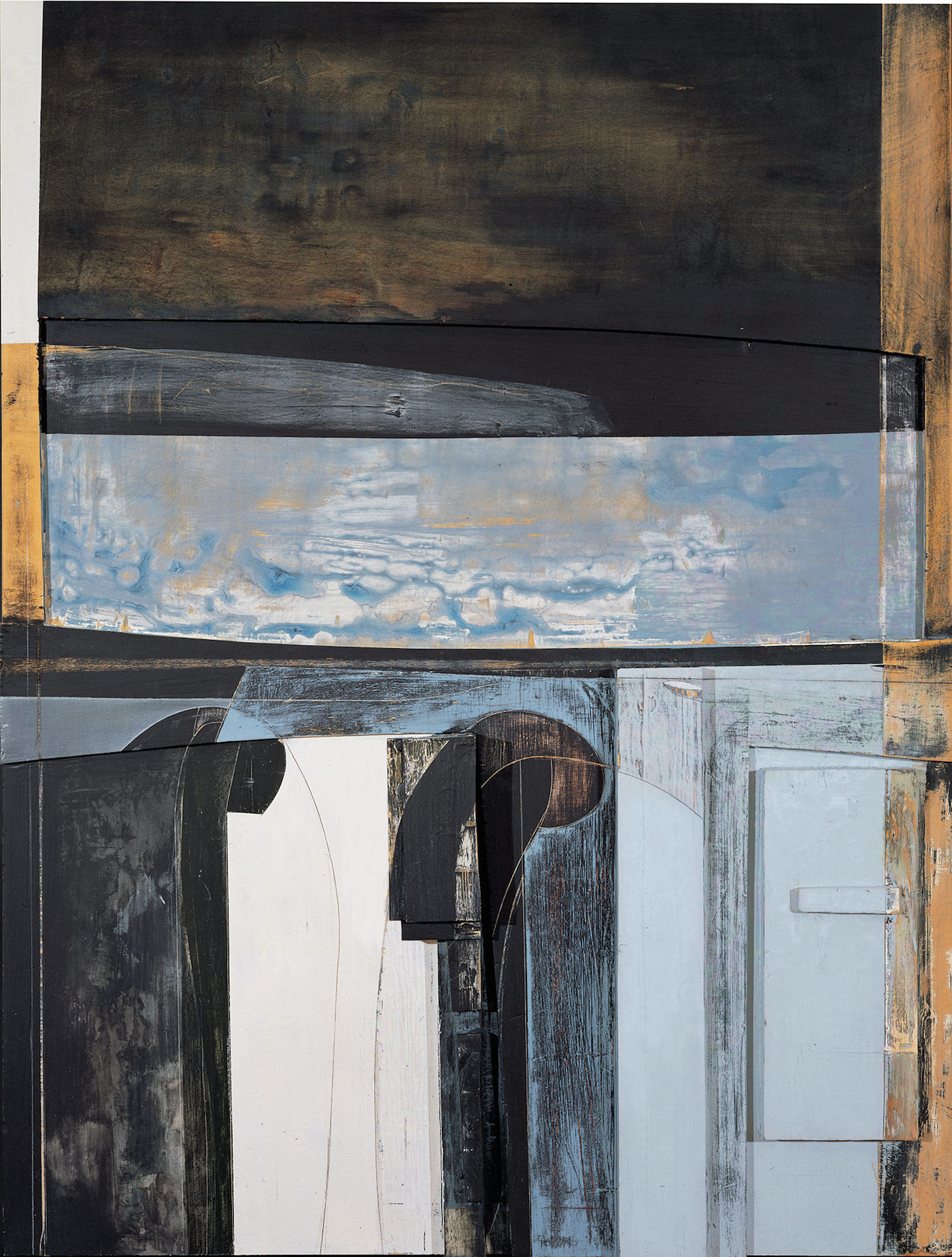